An Emotional Jon Stewart Drops the Comedy to Talk Charleston: ‘We Still Won’t Do Jackshit’ 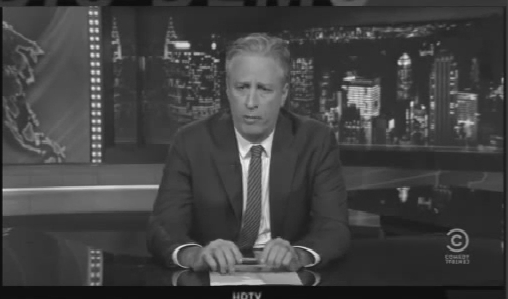 Jon Stewart apologized to his audience tonight for not having any jokes for them, as he just dropped the comedy to get serious about Charleston. He said, “I honestly have nothing, other than just sadness.”

“By acknowledging it,” Stewart pointed out, “by staring into that and seeing it for what it is, we still won’t do jackshit. Yeah, that’s us. That’s the part that blows my mind.”

He contrasted how the U.S. does whatever it can to protect everyone from foreign threats, but has an “eh, what are you gonna do?” attitude to domestic threats.

Stewart brought up the racial wounds being opened in Charleston, especially invoking how South Carolina still flies the Confederate flag and has roads named for Confederate generals.

He sarcastically added, “And the white guy’s the one who feels like his country’s being taken away from him.”