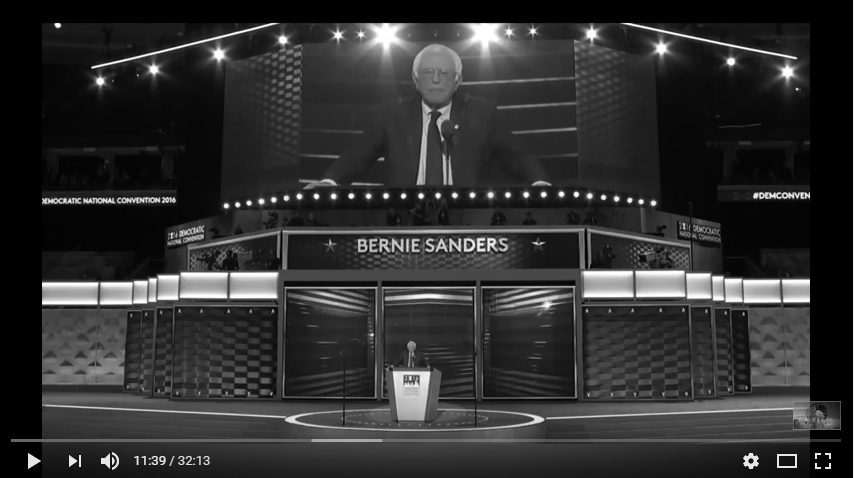 Senator Bernie Sanders‘ full speech at the Democratic National Convention in Philadelphia. During the DNC speech, Sanders thanks delegates for supporting his campaign, says this election is more important than the individual candidates who are running.

How great it is to be with you tonight.

Let me begin by thanking the hundreds of thousands of Americans who actively participated in our campaign as volunteers. Let me thank the 2 1/2 million Americans who helped fund our campaign with an unprecedented 8 million individual campaign contributions – averaging $27 a piece. Let me thank the 13 million Americans who voted for the political revolution, giving us the 1,846 pledged delegates here tonight – 46 percent of the total. And delegates: Thank you for being here, and for all the work you’ve done. I look forward to your votes during the roll call on Tuesday night.

And let me offer a special thanks to the people of my own state of Vermont who have sustained me and supported me as a mayor, congressman, senator and presidential candidate. And to my family – my wife Jane, four kids and seven grandchildren –thank you very much for your love and hard work on this campaign.

Together, my friends, we have begun a political revolution to transform America and that revolution – our revolution – continues. Election days come and go. But the struggle of the people to create a government which represents all of us and not just the 1 percent – a government based on the principles of economic, social, racial and environmental justice – that struggle continues. And I look forward to being part of that struggle with you.

This election is about – and must be about – the needs of the American people and the kind of future we create for our children and grandchildren.

This election is about ending the 40-year decline of our middle class the reality that 47 million men, women and children live in poverty. It is about understanding that if we do not transform our economy, our younger generation will likely have a lower standard of living then their parents.

This election is about ending the grotesque level of income and wealth inequality that we currently experience, the worst it has been since 1928. It is not moral, not acceptable and not sustainable that the top one-tenth of one percent now own almost as much wealth as the bottom 90 percent, or that the top 1 percent in recent years has earned 85 percent of all new income. That is unacceptable. That must change.

This election is about remembering where we were 7 1/2 years ago when President Obama came into office after eight years of Republican trickle-down economics.

The Republicans want us to forget that as a result of the greed, recklessness and illegal behavior on Wall Street, our economy was in the worst economic downturn since the Great Depression. Some 800,000 people a month were losing their jobs. We were running up a record-breaking deficit of $1.4 trillion and the world’s financial system was on the verge of collapse.

We have come a long way in the last 7 1/2 years, and I thank President Obama and Vice President Biden for their leadership in pulling us out of that terrible recession.

Yes, we have made progress, but I think we can all agree that much, much more needs to be done.

This election is about which candidate understands the real problems facing this country and has offered real solutions – not just bombast, fear-mongering, name-calling and divisiveness.

By these measures, any objective observer will conclude that – based on her ideas and her leadership – Hillary Clinton must become the next president of the United States. The choice is not even close.

This election is about a single mom I saw in Nevada who, with tears in her eyes, told me that she was scared to death about the future because she and her young daughter were not making it on the $10.45 an hour she was earning. This election is about that woman and the millions of other workers in this country who are struggling to survive on totally inadequate wages.

Hillary Clinton understands that if someone in America works 40 hours a week, that person should not be living in poverty. She understands that we must raise the minimum wage to a living wage. And she is determined to create millions of new jobs by rebuilding our crumbling infrastructure – our roads, bridges, water systems and wastewater plants.

But her opponent – Donald Trump – well, he has a very different view. He does not support raising the federal minimum wage of $7.25 an hour – a starvation wage. While Donald Trump believes in huge tax breaks for billionaires, he believes that states should actually have the right to lower the minimum wage below $7.25. What an outrage!

This election is about overturning Citizens United, one of the worst Supreme Court decisions in the history of our country. That decision allows the wealthiest people in America, like the billionaire Koch brothers, to spend hundreds of millions of dollars buying elections and, in the process, undermine American democracy.

Hillary Clinton will nominate justices to the Supreme Court who are prepared to overturn Citizens United and end the movement toward oligarchy in this country. Her Supreme Court appointments will also defend a woman’s right to choose, workers’ rights, the rights of the LGBT community, the needs of minorities and immigrants and the government’s ability to protect the environment.

If you don’t believe this election is important, if you think you can sit it out, take a moment to think about the Supreme Court justices that Donald Trump would nominate and what that would mean to civil liberties, equal rights and the future of our country.

This election is about the thousands of young people I have met who have left college deeply in debt, and the many others who cannot afford to go to college. During the primary campaign, Secretary Clinton and I both focused on this issue but with different approaches. Recently, however, we have come together on a proposal that will revolutionize higher education in America. It will guarantee that the children of any family this country with an annual income of $125,000 a year or less – 83 percent of our population – will be able to go to a public college or university tuition free. That proposal also substantially reduces student debt.

This election is about climate change, the greatest environmental crisis facing our planet, and the need to leave this world in a way that is healthy and habitable for our kids and future generations. Hillary Clinton is listening to the scientists who tell us that – unless we act boldly and transform our energy system in the very near future – there will be more drought, more floods, more acidification of the oceans, more rising sea levels. She understands that when we do that we can create hundreds of thousands of good-paying jobs.

Donald Trump? Well, like most Republicans, he chooses to reject science. He believes that climate change is a “hoax,” no need to address it. Hillary Clinton understands that a president’s job is to worry about future generations, not the short-term profits of the fossil fuel industry.

This campaign is about moving the United States toward universal health care and reducing the number of people who are uninsured or under-insured. Hillary Clinton wants to see that all Americans have the right to choose a public option in their health care exchange. She believes that anyone 55 years or older should be able to opt in to Medicare and she wants to see millions more Americans gain access to primary health care, dental care, mental health counseling and low-cost prescription drugs through a major expansion of community health centers.

And What is Donald Trump’s position on health care? No surprise there. Same old, same old Republican contempt for working families. He wants to abolish the Affordable Care Act, throw 20 million people off of the health insurance they currently have and cut Medicaid for lower-income Americans.

Hillary Clinton also understands that millions of seniors, disabled vets and others are struggling with the outrageously high cost of prescription drugs and the fact that Americans pay the highest prices in the world for their medicine. She knows that Medicare must negotiate drug prices with the pharmaceutical industry and that drug companies should not be making billions in profits while one in five Americans are unable to afford the medicine they need. The greed of the drug companies must end.

This election is about the leadership we need to pass comprehensive immigration reform and repair a broken criminal justice system. It’s about making sure that young people in this country are in good schools and at good jobs, not in jail cells. Hillary Clinton understands that we have to invest in education and jobs for our young people, not more jails or incarceration.

In these stressful times for our country, this election must be about bringing our people together, not dividing us up. While Donald Trump is busy insulting one group after another, Hillary Clinton understands that our diversity is one of our greatest strengths. Yes. We become stronger when black and white, Latino, Asian-American, Native American – all of us – stand together. Yes. We become stronger when men and women, young and old, gay and straight, native born and immigrant fight to create the kind of country we all know we can become.

It is no secret that Hillary Clinton and I disagree on a number of issues. That’s what this campaign has been about. That’s what democracy is about. But I am happy to tell you that at the Democratic Platform Committee there was a significant coming together between the two campaigns and we produced, by far, the most progressive platform in the history of the Democratic Party. Among many other strong provisions, the Democratic Party now calls for breaking up the major financial institutions on Wall Street and the passage of a 21st Century Glass-Steagall Act. It also calls for strong opposition to job-killing free trade agreements like the Trans-Pacific Partnership.

Our job now is to see that platform implemented by a Democratic Senate, a Democratic House and a Hillary Clinton presidency – and I am going to do everything I can to make that happen.

I have known Hillary Clinton for 25 years. I remember her as a great first lady who broke precedent in terms of the role that a first lady was supposed to play as she helped lead the fight for universal health care. I served with her in the United States Senate and know her as a fierce advocate for the rights of children.

Hillary Clinton will make an outstanding president and I am proud to stand with her here tonight.

Bernie Sanders’ Speech at the Democratic Convention via TIME

« First Lady Michelle Obama Full Emotional And Motivational Speech At The DNC In PHL 25/7/16 FULL
Best ever German words: What California sand dunes have to do with Germany (& Donald Trump) »